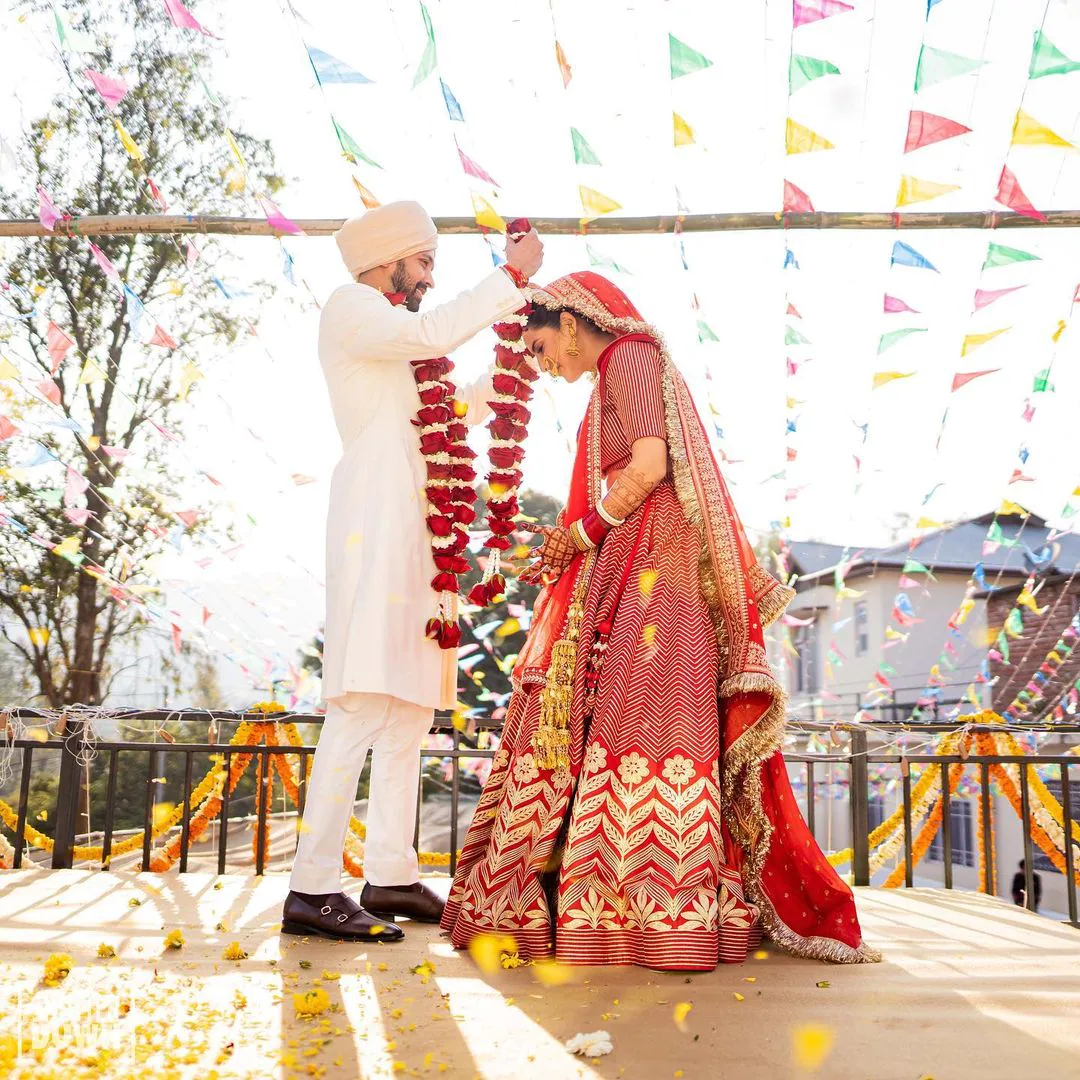 Destination weddings are something that we all adore. And the rituals, traditions, help to spread a spectacular vibe even at a place that is far away from your home. One such destination wedding was of Vikrant Massey and Sheetal Thakur. This can be a great inspiration for couples planning to get married soon in an intimate and eco-friendly arrangement.

Bollywood actor Vikrant Massey tied knots recently with his long-time girlfriend Sheetal Thakur in a low-key intimate wedding affair. The couple got married on February 18 at Himachal Pradesh in the presence of their close friends and family. Vikrant and Sheetal have been dating each other since the year 2015. They met each other while Vikrant was involved in the shoot for “Broken but Beautiful”. Sheetal was playing the part of Vikrant in the web series. Later to the show, they became good friends and fell in love. The actor confirmed their engagement back in the year 2019.

The wedding ceremony of Vikrant and Sheetal was very simple, subtle, and beautiful.

How was the wedding organized?

The reports shared that wedding took place in the hometown of Sheetal, i.e. Shahtalai, Himachal Pradesh. The couple registered their wedding on 14 February and then performed the traditional style wedding. They had a private Roka and engagement ceremony in 2019 later to which they moved to live together. The delay was of course as expected due to the Pandemic. But nothing has stopped them to get hitched this year. The couple was highly keen to go organic and eco-friendly, which is why everything, from the décor (primarily set up from locally grown flowers) to ‘Dham’ (the feast celebrated traditionally in the Himachal Pradesh) was done with that in mind.

Vikrant chose to go with a white kurta-pajama and a royal-looking Nehru jacket for the Haldi rituals. Massey on one hand was looking extremely handsome in the all-white monochrome outfit; Sheetal looked dreamlike in an embellished yellow net lehenga. Rather than going for some loud ornaments, she preferred floral jewelry with contrasting hues of pink and white. The duo looked so adorable together that all eyes were rolling on them.

For the D-day, Massey was styled in a royal ivory white-hued sherwani with classy gold buttons on them. For his saafa, Vikrant Massey decided to go with a very faint pink-hued option. While Vikrant looked debonair in sherwani, Sheetal was nothing less than a glowing fairytale bride that chose a tomato red lehenga with golden embroidery. The skirt had a pretty floral design and the blouse had vertical golden lines. The highlight of the bride’s outfit was the old-style gotta fringe dupatta that gave her a beautiful look! If we talk about her jewelry, the bride wore a traditional gold Ranihaar and a subtle neckpiece. She also had matching gold earrings, maang tikka, and a big traditional Himachali nath.