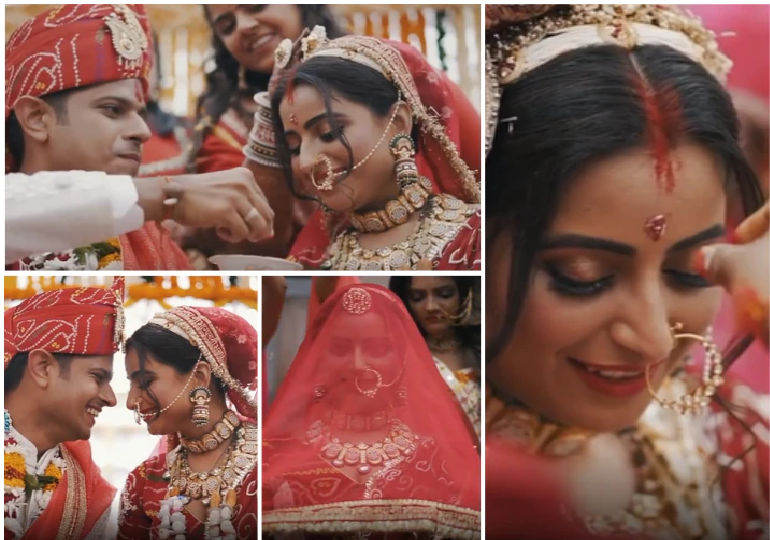 As we all know, this is a wedding season and most of the TV and Bollywood stars are getting married. Popular fame Neil Bhatt (Virat) and Aishwarya Sharma (Paakhi) from popular Star Plus TV serial “Ghum Hai Kisikey Pyar Mein” found love in each other and tied knots on 30th November in Ujjain, Madhya Pradesh. The pictures from the wedding functions of the duo had won the hearts of their audience. The performance of both the actors in the serial has been stunning. A few days back the couple accept their love in public by opening up about their relationship. The past week has been filled with glimpses from the pre-wedding festivities of the couple.

Neil Bhatt shared pictures from their Roka, where we can see the couple twinning their dresses in mint green color. Virat was seen wearing a mint green kurta with white pants and Aishwarya was in a matching Palazzo suit. Neil wrote to his Instagram handle, “From the madness to the fun, and all the love that bloomed, or a lifetime we became one. #Roka.”

Aishwarya donned her look in a beautiful pink-hued top for the bachelor party and danced like crazy while posing in front of the camera. She shared a video from the night to Instagram and wrote a cute gratitude note for her friends that gave her bachelor party.

She wrote, “It was unexpected and thank you so much guys for this wonderful surprise I had so much fun and you can see my happy face and I told him everything @kishoreaashna @vakilsharmachitra @rohinivakilkapoor @niveditabasu and thankyou Ashna for making this video I love it, #bachelorette.”

The pictures from haldi, mehndi, and sangeet went viral seeing the couple madly in love with each other. For the haldi ceremony, both were dressed in yellow outfits while they applied haldi to each other. Neil Bhatt chose a yellow kurta while the bride wore a yellow saree and complimented it with a gajra in her hair. The cast members from the show also joined them in their wedding traditions. The couple also shared cute pictures from the Mehendi ceremony.

For Mehendi function in the bride’s family, Aishwarya wore a green-colored sharara that looked quite stunning and she chose to keep her look simple with a small bindi. Aishwarya chose to go in a red suit and Neil was ready for the function in green kurta and Koti. Neil Bhatt gave a surprise solo dance performance for his bride-to-be at the sangeet ceremony. He danced very well to the Malhari song from Bajirao Mastani where he wore traditional kurta and dhoti.

The bride was seen wearing a red bandhani lehenga with golden embroidery and completed her look with heavy jewelry. Her prince charming groom Neil Bhatt chose a white dhoti and kurta and paired it with a doshala. Neil paired his look with a bandhani pagdi over his head.

The couple hosted a grand reception in Mumbai on December 2nd i.e. two days later to their wedding. Several prestigious actors from the industry attended their reception party including Rekha and their friends like Sheetal Maulik, Yash Pandit, Ayesha Singh, and others.