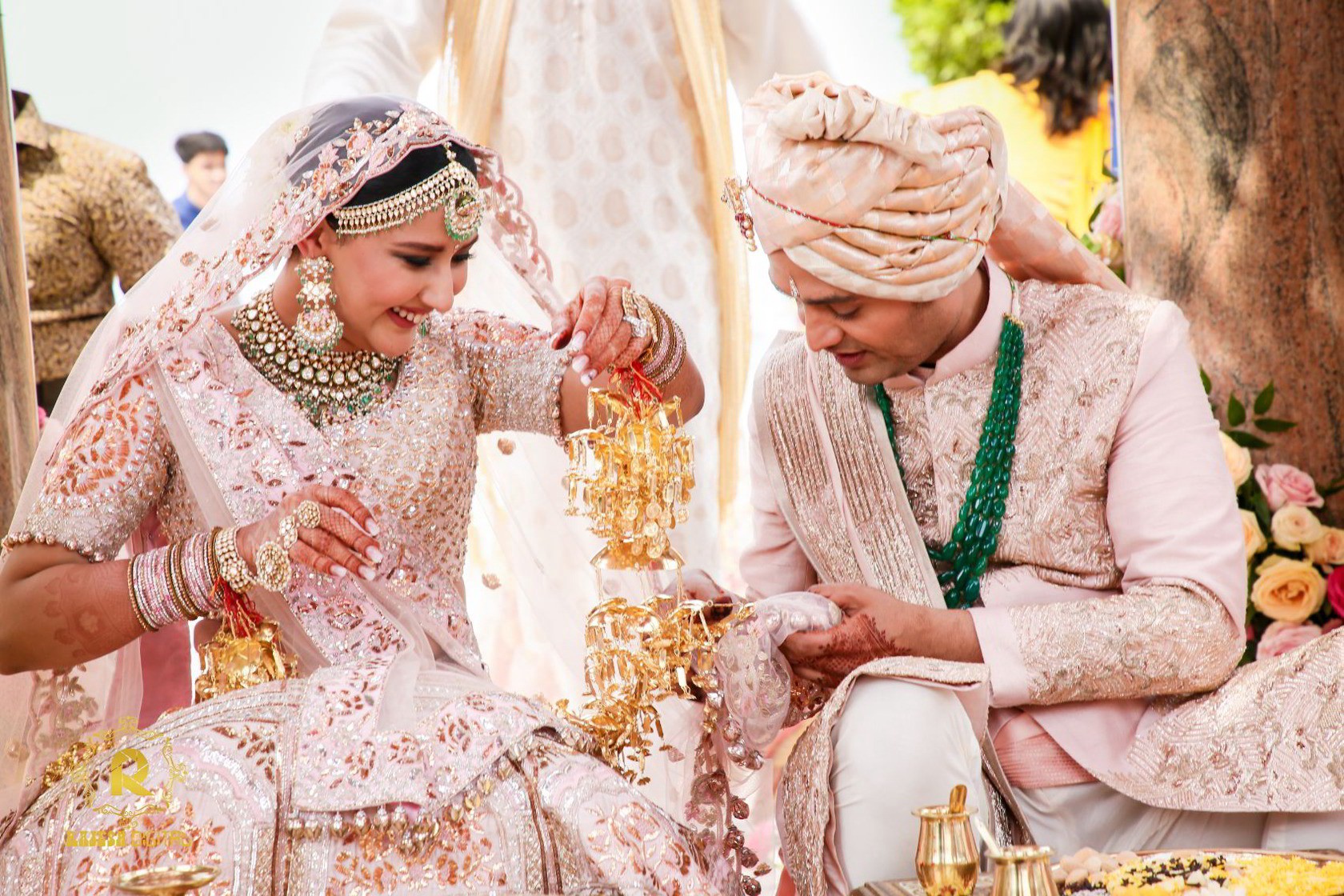 Rajasthan is known over the world for its rich, vibrant cultural heritage and the weddings happening there can never make an exception. Rajasthani weddings are made to happen as a big royal festival with grand celebrations and decorations. Rajasthani Royal weddings have always been an inspiration to people all over the world who want to make their weddings happen to like a fest. The best examples of those weddings can be the Rajputana and Marwari weddings that have great historical significance in their respective communities. The marriages in Rajasthan are arranged after matching the horoscope of bride and groom and then their traditions are performed one after the other.

Traditions of the Rajasthani wedding (Marwari)

One of the very first ceremonies coming with Marwari weddings in Rajasthan is Bhaat Nyotna. Almost whole of the Marwari community celebrates this pre-wedding custom. In this ritual, the bride and the groom invite each other by sending wedding invitations to each other and a few gift items. The families assure each other to continue the support for the upcoming wedding festivities.

The Marwari community like any other in India has their bride and groom offering prayers to the Lord Ganesha for happy and a glittering wedding to happen. Both bride and the groom will have Nandi Ganesh Pooja at their homes before the wedding day. As Lord Ganesha is known to be the god of happiness who brings good luck, the Rajasthani people also give great importance to performing this ritual. You can observe an idol of Shri Ganesha in almost all of the rituals associated with Hindu or Rajasthani wedding ceremonies.

Ratri Jaga ritual is performed to safeguard the couple and their new relationship from the evil vibes. This custom involves painting holy symbols on the walls of the home. The family from the groom’s side will visit the bride’s house, where both the relatives will exchange precious gifts and sweets. The ring exchanging ceremony is also performed on this day during this ritual.

Another beautiful and meaningful ritual is the Palla and Janeu, where the bride and the groom participate. In the Palla ceremony, the family of the groom visits the bride’s house and gifts clothes and trendy jewels to the bride. These are the gifts that the bride would be wearing on her wedding day. In the Janeu ceremony, the groom is made to wear a holy thread, also known as Janeu. It is considered that the couple will get a prosperous married life on wearing this thread.

The Mehndi ceremony is believed to be auspicious not only for the bride but also for the groom. It is mandatory to apply Mehndi, and while doing so, you can come across some spectacular Mehndi designs that the brides opt for.

During this Baan ritual, the bride and the groom are given a ritualistic bath before they proceed to get ready for their Rajasthani wedding.

Mehfil is a special Marwari wedding tradition in which the bride and the groom celebrate their bachelorhood with an exciting Bachelorette party or Bachelor’s party separately. They will enjoy their night with a good time together while enjoying soothing Rajasthani folk music and some tasty food.

We all know the prominence of Lord Ganesha in Hindu culture, and Rajasthani weddings are never complete without this. On the wedding day, the bride and the groom, along with their respective families offer prayer to Lord Ganesha to bless with a fortune to everyone’s life.

NIkasi symbolizes when the sister of the groom ties a sacred golden-colored thread around the groom’s head. She would put a black dot with Kajal on the groom’s cheek to safeguard him from any bad vibes. This ritual is performed at the groom’s place two-three days before the wedding day.

Marwari weddings are highly related to religious activities and hence exclusive prayers are held for the conduct of a smooth wedding without creating any fuss. Gharwa is one of those ritualistic practices where the bride’s family worships Goddess Parvati. A Goddess idol is taken to the bride’s house where they prepare it with clothes and jewelry sent from the groom’s side.

Kanyadan is an important tradition followed in every Hindu wedding where the father of the bride gives his daughter’s hand to the groom. Before the ritual, the father explains family lineage to the groom. After that, he asks the groom whether he will be able take his daughter’s responsibility. The bride is then asked if she is ready to accept the groom as her husband and his surname for her life.

Panigrahan is an important ritual performed in all Marwari weddings of Rajasthan. During this, the bride consents to the groom’s acceptance and agrees to take all responsibility. The parents give their daughter to the groom saying that from that moment, he will be in response to take care of her. Rajasthani weddings depict the coalition of two souls, and this ritual has great significance.

The ritual starts with the couple taking rounds around the holy fire seven times while taking vows and this is known as Saptapadi or sat pheras. The couple executes the ritual and chants mantras.

One of the most attractive traditions coming with a Marwari wedding is Aanjhala Bharai. In this tradition, the groom’s father puts a bag full of with precious jewels and money in the lap of the bride. This simply states that he has passed on the financial responsibilities of the house to his new daughter-in-law.

All the above-mentioned rituals were performed either at the groom’s place, the bride’s place, or both. While this is conducted after the bride comes along with the groom to his house where the groom’s family with huge preparations welcomes her. Firstly, her sister-in-law welcomes her with the bride’s sweets and gifts. Then the groom’s aunt pr mother performs Aarti as a sign of bringing auspiciousness. The elders then ask the couple to light a lamp in the chantry of the house. After this, some entertaining games and rituals are performed among the bride and groom as instructed by the elder members of the family.